The extremely popular ETX125 takes mobile astronomy to the next level. This large 127mm aperture and 1900mm (f/15) focal length marry the portability of the ETX with Meade’s premium optics. The ETX125 Observer has a Maksutov-Cassegrain optical design for pinpoint star images and extraordinary contrast, making it a great deep-sky performer and ideal for detailed lunar and planetary observation.

The ETX125 Observer also includes a stable but portable full-size steel tripod with dual-fork mount and equatorial (EQ) tilt plate - allowing for polar alignment, which is ideal for astrophotography. This model has an internal flip mirror to let light focus to the rear of the telescope (instead of the mirror reflecting the light 90-degrees to the eyepiece), allowing attachment of a camera on the back of the scope - adapters sold separately.

The ETX125 Observer also comes with a bubble level/compass to help with leveling the tripod and mount. Approximate assembled weight: 11.3 kg (25 lbs).

The ETX Observer Series also features a fully-equipped, GoTo system with AudioStar™. In addition to finding and tracking objects in the night sky, AudioStar™ also boasts a number of features of its own, including: 30,000+ object-database, built-in speaker, and over 4 hours of audio content that educates you about objects you observe.

Whether you’re observing on the go or from your backyard, the ETX125 Observer will make exploring the night sky easy, educational, and exciting. Go ahead, start exploring! 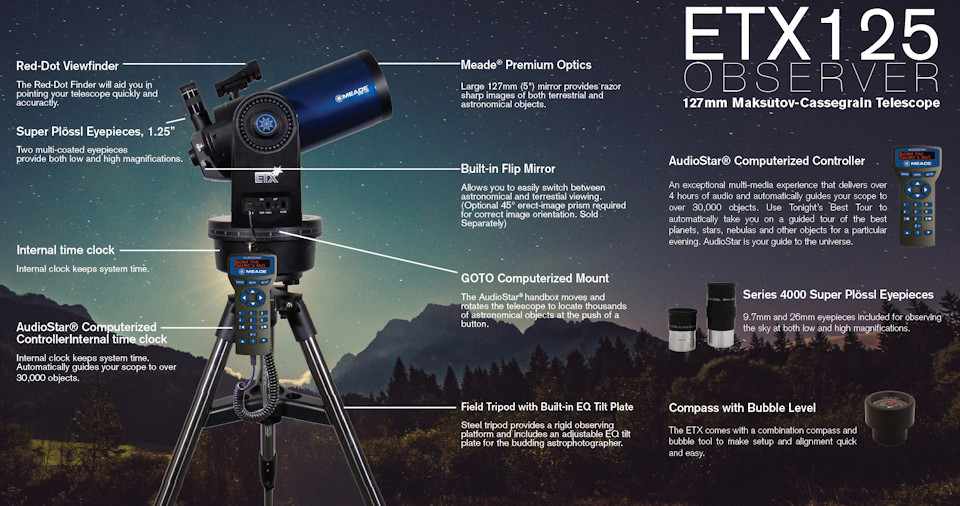 The sturdy and portable full height tripod features chrome plated steel legs and is height adjustable from 69cm (27") to 114 cm (45"). Weight is 4.5 kg (9.8 lbs). Features a built-in tilt plate which allows equatorial polar alignment from latitudes of 25 degrees or higher.

The AudioStar computer controller with speaker helps you quickly find and GoTo over 30,000 objects in the night sky. With the AudioStar Controller plugged into your Meade telescope the astronomical universe is in the palm of your hand. Never before has such powerful telescope technology been so easy to operate, even by the most casual observer. Coiled cord and instructions included.

View planets, stars, galaxies, nebulae, comets and more-all at the push of a button. Don't know what you want to view this evening? Then go to the Tonight's Best™ tour in your AudioStar. It automatically selects the best objects in the sky for that particular time and location.

Once aligned with the sky the AudioStar is ready to take you to any object in the over 30,000 object database. In addition to GoTo and tracking capability the AudioStar permits a wide array of fascinating and educational functions such as multiple Guided Tours, digital positional readouts, a database of up to 200 user-defined objects, 9-Speed dual-axis movement, the ability to link with a PC using optionally available software and cord, and much more.

The AudioStar controller provides all of the telescope control functions of the previous AutoStar handboxes but adds unique Astronomer Inside digital audio software and a speaker built into the AudioStar body that can provide you with more than four hours of fascinating and professionally-recorded audio descriptions of the objects you are observing. With Astronomer Inside technology, everyone around your telescope can listen and learn about more than 500 of the celestial objects contained in the AudioStar database, including planets, nebulas, star clusters, the Moon, and much more. Astronomer Inside puts the experience and astronomical knowledge of a professional astronomer in the palm of your hand.

Included in the AudioStar’s database are all of the following 30,000+ astronomical objects and stars – a range of objects certain to keep even the most active amateur astronomer growing in his or her studies of the skies for years:

How to setup & align your ETX Observer

How to choose the perfect telescope

Learn how to align your Meade AZ telescope, including the StarNavigartor NG, ETX Observer, LX65, LX90, LX200, LX600 and more.

Imaging with a telescope

This article identifies the parts of a complete imaging system for astronomy, discusses the relationships of the parts and presents a range of relevant astronomical equipment and software.

Visual observation through a telescope

Get the most out of your telescope when visually observing the Moon, planets, comets and deep sky objects. We will be reviewing the most popular telescope designs used for observational purposes before venturing into other aspects.

Whether you consider purchasing your second telescope or you are new to astronomy but you are looking for a more advanced and larger telescope from day one, there are plenty of options.

Buying your first telescope is probably going to be your most difficult decision as an amateur astronomer.

How to setup and align your ETX Observer

This tutorial video demonstrates how to set up and star align the ETX Observer telescopes.

Photography with the Meade ETX90

Can a telescope be used as a powerful lens for your DSLR camera?

Do you know the difference between the various Meade handbox controllers?

There is another excellent review for the ETX90 Observer published in the June issue of Astronomy Now magazine.

The ETX Observer series of telescopes is reviewed in issue 64 of All About Space magazine.

There is a new advertisement that has appeared in two UK magazines. It promotes the new ETX Observer telescopes. The advert appears in Astronomy Now and Sky at Night magazines.