Earlier today, British astronaut Tim Peake returned to Earth concluding a six-month mission in space on board the International Space Station (ISS). Tim was part of a three-member crew that landed in Kazakhstan inside a Russian Soyuz capsule. The other crew-members on the Soyuz were American astronaut Col Tim Kopra and Russian cosmonaut Yuri Malenchenko.

At approximately 3am UK time, the three men climbed from the ISS into the Soyuz TMA-19M spacecraft. Closing the hatch between the station and the spacecraft 34 minutes later marked the end of ISS expedition 47 and Tim Peake’s Principia mission. 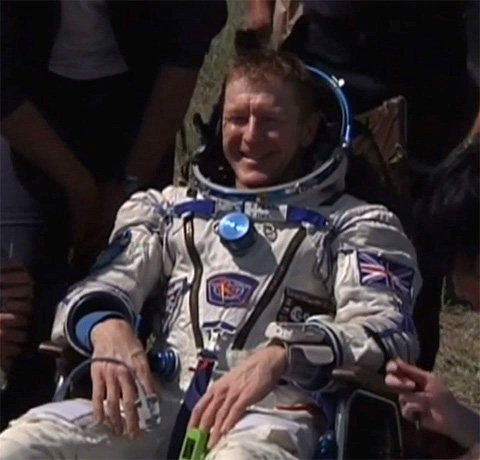 Tim Peake safely back on Earth after landing in Kazakhstan.

Tim Peake is the first British astronaut to be sent to the ISS by the European Space Agency. His mission was named Principia after Sir Isaac Newton’s landmark work describing the laws of motion and gravity, and its main purpose was to contribute to scientific knowledge by conducting experiments in zero gravity. Peake did more than that as he kept in touch with the public on social media and took part in video-linked question and answer sessions. He also engaged in educational activities with schoolchildren.

During his mission, he participated in over 250 experiments, performed a spacewalk, run the London Marathon on a treadmill and inspired more than one million schoolchildren, in the process receiving an honour from the Queen for “extraordinary service beyond our planet”.

The crew will be transferred to Karaganda airport. From there Peake will be flown to the European Astronaut Centre in Cologne, Germany, while his US and Russian colleagues go to Houston and Star City respectively.