The value of the LX600 comes as much from its timing as from its advanced technology.

Fork-Mounted Schmidt-Cassegrain telescopes have been around for more than half a century. That’s a sobering thought for those of us who vividly remember the first advertisements for them appearing in the pages of this magazine in the 1960s and their popularity growing almost explosively after Celestron introduced an attractively priced 8-inch model a few years later. By the early ’80s Meade too was building Schmidt-Cassegrains, and the familiar silhouettes of stubbytube, fork-mounted telescopes were ubiquitous along the skyline at every star party large and small. Schmidt-Cassegrains were the telescope to own whether your interests lay in visual observing, astrophotography, or both. 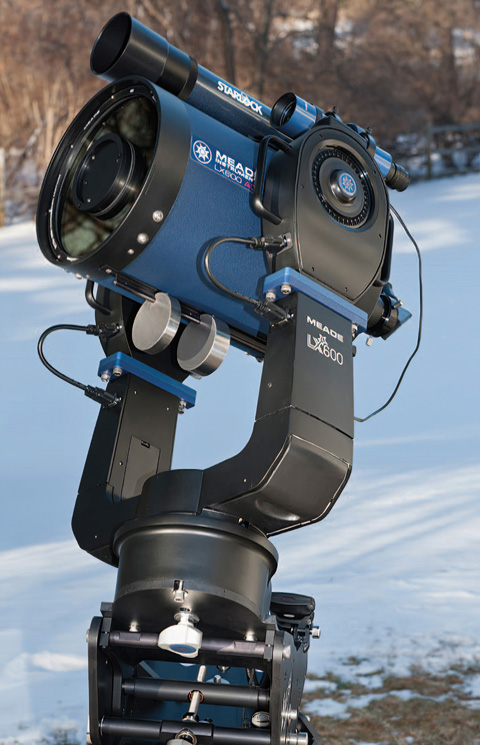 While it has the outward appearance of the fork mounted Schmidt-Cassegrain telescopes that have served several generations of amateur astronomers, Meade’s new LX600-ACF line has state-of-the-art optics and electronics in a newly engineered telescope and mount that have been designed for deep-sky astrophotography. For several months last year, the author tested this 10-inch LX600-ACF from the driveway of his suburban-Boston home.

Meade touts “revolutionary new technology” for its LX600 scopes, but even the newest technology involved — StarLock’s automatic, full-time autoguiding — is a few years old. But that’s a good thing, since it means that it’s innovation that’s already survived the test of time. What is new, however, is how all this technology is wrapped in updated hardware designed from the get-go as a platform for long-exposure astrophotography. Here’s a quick look at the LX600’s major features.

Meade avoids calling the LX600 a Schmidt-Cassegrain, using instead the acronym ACF for Advanced Coma-Free optics after a change the company introduced to the traditional Schmidt-Cassegrain optical design more than a decade ago. In addition to being photographically faster than the original f/10 Schmidt-Cassegrain design (which Meade still offers in its other telescope lines), the f/8 ACF produces nice, round star images across full-frame DSLR cameras. My review of Meade’s then-new design, which was introduced under the moniker RCX but later changed to ACF, appears in this magazine’s February 2006 issue (page 78), and includes side-by-side comparison images made with 12-inch versions of the original f/10 and new f/8 optical systems. There’s no question that the ACF optics perform better for deep-sky photography.

The LX600 optical-tube assembly (OTA) has an improved mounting system for the primary mirror that virtually eliminates image shift as you focus the instrument. And there’s now a very smooth, dual-speed focuser that aids with critical focusing. But achieving precise focus, which is paramount for maximum imaging performance, still requires a delicate touch on the fine-focus knob, and many astrophotographers will want to use an optional electric focuser (models are available from Meade and other manufacturers).

While outwardly similar to other Meade scopes, especially the LX200 line, the LX600 is substantially more robust. Simply put, the 10-inch model I tested is the most stable 10- to 12-inch fork-mounted scope I’ve yet reviewed, with the possible exception of Meade’s long-discontinued 12-inch RCX400. And stability is what helps make the LX600 such a successful imaging platform. 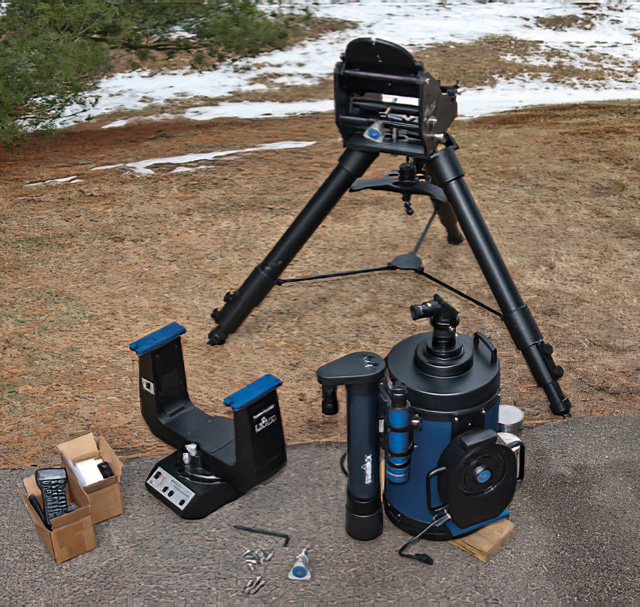 The telescope breaks down into four major components: a 44-pound tripod, the optional 28-pound X-Wedge (shown here attached to the tripod), a 34-pound base with fork arms, and a 55-pound optical tube assembly (OTA). Stripping the OTA of its finder, counterweights, and StarLock guide scope reduces its weight to 44 pounds, but the author still found it difficult to safely assemble the telescope in equatorial mode by himself. 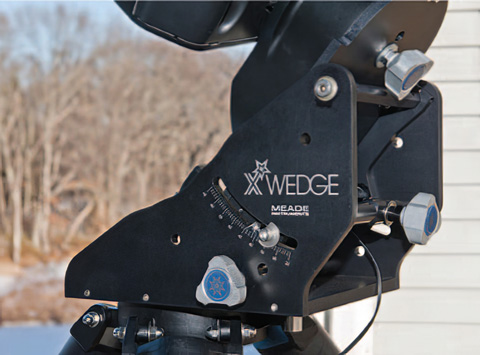 The heavy-duty X-Wedge gets a thumbs up for its design and construction. Ball-bearings and large hand knobs on the azimuth and elevation adjustments make easy work of precisely moving the heavy telescope during polar alignment. 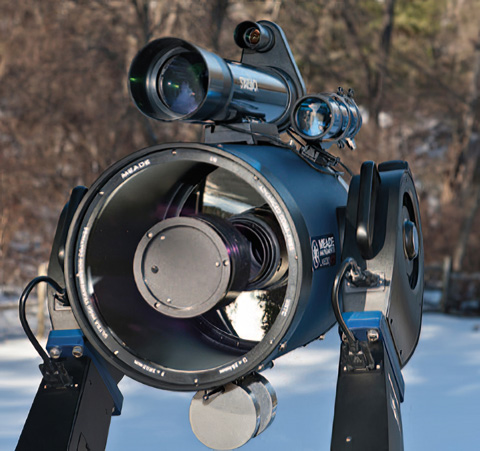 In addition to the scope’s 10-inch main aperture and 50-mm finder pointing skyward, there’s StarLock’s 80-mm f/5 guide refractor and a small-aperture, wide-field camera, which together perform a variety of important tasks beyond just autoguiding the main telescope for astrophotography. These include precision centering of celestial objects in the field of a camera or eyepiece, and helping refine the telescope’s polar alignment.

I did, however, encounter a few differences this time. Most notably, unlike my previous experience, StarLock did not autoguide flawlessly “out of the box.” I first had to train the PEC and perform what Meade calls an Automatic Rate Calibration (ARC). These steps are highly automated, involving only a few button presses on the hand control and about 15 minutes of time. And since the PEC information is stored in the scope’s memory, you only need spend a couple of minutes running the ARC during subsequent observing sessions. In hindsight, it was my experience with the LX850 that was unusual, since Meade clearly states in the LX600 manual that these steps are “an essential procedure to obtain peak tracking accuracy.”

As expected, with the telescope only crudely polar aligned, an unguided exposure (left) shows significant image trailing. But with StarLock turned on (right), the tracking was picture perfect. These back-to-back 5-minute exposures of the globular star cluster M13 in Hercules are with a Nikon D700 camera and Barlow lens.

My original StarLock testing with the LX850 was under tranquil summer skies. Under similar conditions StarLock performed equally well with the LX600, but when the frequently turbulent seeing conditions of our New England winters eventually rolled around, StarLock had a good, but not perfect, track record autoguiding. To be fair, any autoguider will struggle under crummy seeing conditions, so I wasn’t surprised to have a few guiding failures now and then.

The Autostar II hand control operates every feature of the LX600 from GoTo pointing to the advanced functions of StarLock. Below: The LX600 telescopes can be powered by a set of eight C batteries (four housed in each fork arm) as well as via a conventional 12-volt DC input jack on the scope’s base. A set of fresh batteries will last for about two nights of observing.