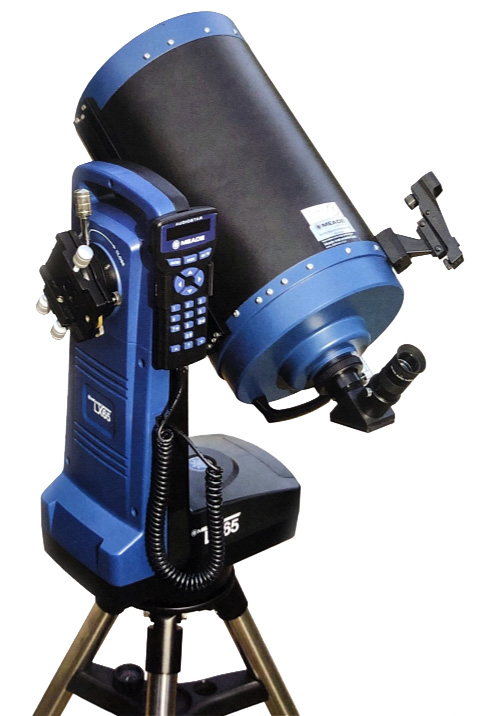 Get up and go. Meade’s new LX65 8-inch ACF features a computerized single arm alt-az mount with computerized, GoTo pointing and plenty of extras. Note the convenient holder for the hand unit and helpful handles on the tube assembly and mount. Fully assembled, the instrument weighs about 18 kilograms (40lb). Photo by Gary Seronik. 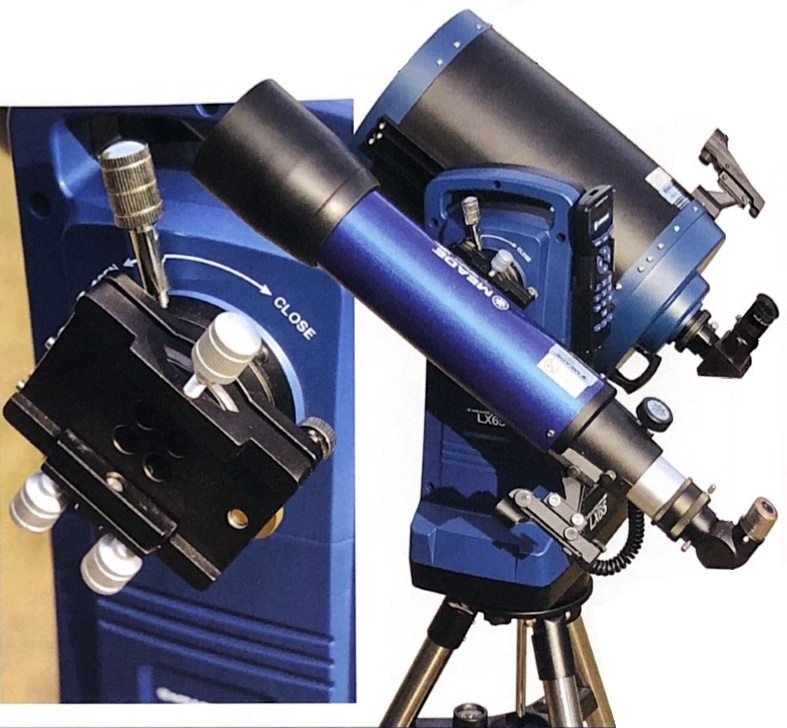 Side saddle. An extra dovetail bracket, far right, permits attaching a second, smaller telescope to the mount. Fine adjustment screws, right, allow the auxiliary scope to be precisely aimed to match the view in the main instrument. The uppermost knob operates the altitude clutch lock.

To prepare for an observing session, I set up the telescope in the “home position”. All three components – tripod, mount and OTA – needed to be exactly level, the horizontal OTA aiming either true north or magnetic north. The accompanying 50-page instruction booklet suggests the latter, and an eyepiece-shaped compass with a built-in bubble level is provided to assist in the process. But I found homing on true north was easier for me in my north-facing suburban yard.

Loosening the clutch on the mount’s altitude arm allowed me to manually level the tube. There is no manual motion in azimuth – to move the scope on that axis, one must power up the mount. Electricity is supplied by installing eight C-cell batteries (not included) in the base of the mount. A port on the altitude arm permits using an AC power adapter (not included) or a portable 12-volt DC power supply (cable not included). For the purpose of this review, I stuck with the batteries.

After eyeballing level and north, I switched on the computer-control hand unit and answered the usual prompts in the two-line LCD screen for date and time. (Earlier, I’d keyed in the latitude and longitude of my observing site – a crucial preliminary step). Next was the star-alignment procedure to ensure GoTo pointing accuracy. I expect newbie stargazers will love it.

The “Easy Alignment” option chooses two bright alignment stars for you. During my early-autumn testing, the software decided to start with brilliant Arcturus in the western sky. The machine slewed rapidly (and loudly!) the long way around, through some 270 degrees, to the target. (The AudioStar control system has a “Quiet Slew” command to limit the speed by a little less than half). AudioStar overshot Arcturus, but I nudged the scope in altitude and azimuth until the star was centred in the red-dot finder and the supplied Super Plossl 26mm eyepiece, which gives roughly a ?-degree wide field.

When I keyed ENTER, the sidereal drive kicked in and the LX65 automatically moved to the second alignment candidate, Altair. After centring Altair, I hit ENTER again and the screen displayed “Alignment Successful”. Amazingly, the alignment result was always good, night after night. Subsequent GoTo commands would consistently place my quarry in (or very near) the field of the 26mm eyepiece. My eyeballing worked! 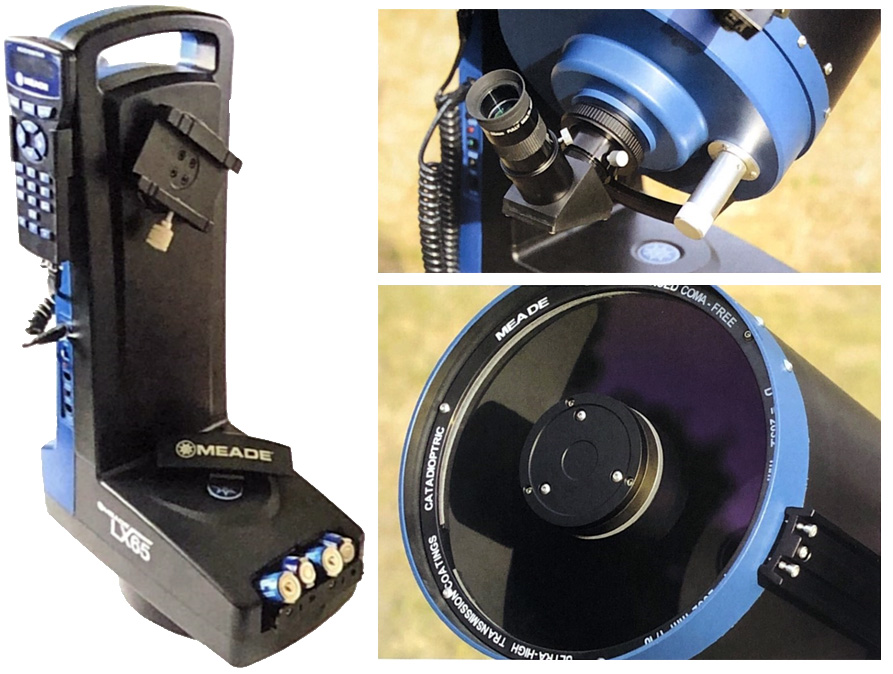 All in the details. Eight C-cell batteries, above (not included), power the LX65. Input ports on the altitude arm permit connecting to an external power source. The star diagonal, top right, accepts 1 ¼ -inch eyepieces, such as the included 26mm Super Plossl eyepiece shown here. Upgrading to a larger diagonal will permit the use of 2-inch oculars. The corrector plate, right, of the LX65 8-inch is recessed less than one inch from the front of the tube assembly and, as such, is exposed to both wayward fingertips and damp night air. A dew shield would be a useful accessory to have. Left photo by Ken Hewitt-White. Right photos by Gary Seronik.

Exploring with the LX65

It was time to observe. The hand unit’s AudioStar software contains a database of roughly 30,000 celestial objects the telescope can locate and track at the push of a key and offers a “Guided Tour” and “Tonight’s Best” selection of sky objects (accompanied by the “Astronomer Inside” voice descriptions) tailored to when I’m actually observing. Most of my priorities were on those AudioStar tours, but I preferred finding my own way around.

I began by star testing the scope’s optics with my alignment star, Altair. In a 9mm Tele Vue eyepiece (generating 226x), Altair exhibited perfectly concentric rings both inside and outside of focus around a tiny Airy disc – indicating very good optical quality. I detected no astigmatism and found images to be coma-free almost to the edge of the field.

When the evening air was steady, I experimented with magnifications ranging from 78x (the supplied 26mm eyepiece) to 290x (a 7mm Nagler) on a variety of objects. The Moon, of course, was an arresting sight. I’d key in a slow slew speed and cruise up and down the lunar terminator, examining ragged craters, jagged mountains and winding rilles. Even though Saturn rode low on the ecliptic, the LX65 showed the Cassini Division in the ansae of the planet’s impressive rings. It was the same low elevation story for Mars, but the scope picked up the dark mass of Syrtis Major plus a tiny white polar cap on the orangey gibbous disc.

During the predawn hours, I indulged in some favourite winter wonders. M42, the Orion Nebula, was glorious. Its teensy Trapezium, fully resolved, was enveloped in wispy wings of nebulosity spanning the 26mm eyepiece field. The open cluster M35 was also a glittering, field-filling delight.

All in all, it was a night of very enjoyable backyard viewing. 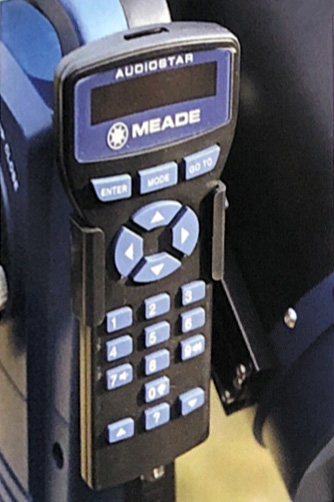 Cosmic controller. The AudioStar hand unit is mostly intuitive to operate; however, the author recommends learning its basic functions indoors before observing. An introductory guide to the hand unit, including a menu tree, is found in the LX65 instruction booklet. Photo by Gary Seronik.

Despite the problems outlined above, I enjoyed working with the LX65. The superb ACF optics and GoTo capability enabled me to enjoy a wealth of sky objects in my light-polluted city sky. I can recommend the 8-inch for novices (they’ll love the “Astronomer Inside” and “Guided Tour” features) and for experience observers ready to upgrade to a larger, well-equipped telescope that’s quick to set up and remarkably portable too.