Website by Opticstar Ltd, official importer of Meade Instruments in the United Kingdom

This 4.5-inch apochromat packs a lot of bang for the buck.

This is a great time to be in the market for a premium refracting telescope. The price for high-quality refractors has fallen dramatically in recent years, and you can now purchase a 4- to-5-inch extra-low dispersion (ED) apochromatic (APO) telescope that’s almost entirely free of the false colour that plagues achromats for a fraction of the cost commonly seen a decade ago.

I’ve had a ball with my own recently purchased apochromat after using almost nothing but Schmidt-Cassegrain telescopes for many years. However, I still consider myself a refractor novice and was eager to see how others performed. So, when I was approached about evaluating Meade’s 115mm Series 6000 ED Triplet APO, I was certainly up for the task.

First impressions are important, and when I unboxed the scope on the day it arrived, I lit up when I saw it. This is a pretty refractor. Although similar in appearance to many current APOs, it has the distinctive “Meade” blue lens cap and trim. The build quality is very good for the price; not quite the same as units costing twice as much or more, but solidly built. The multi-coated objective coatings were visibly effective; incident light falling on the lens seemed to practically disappear. 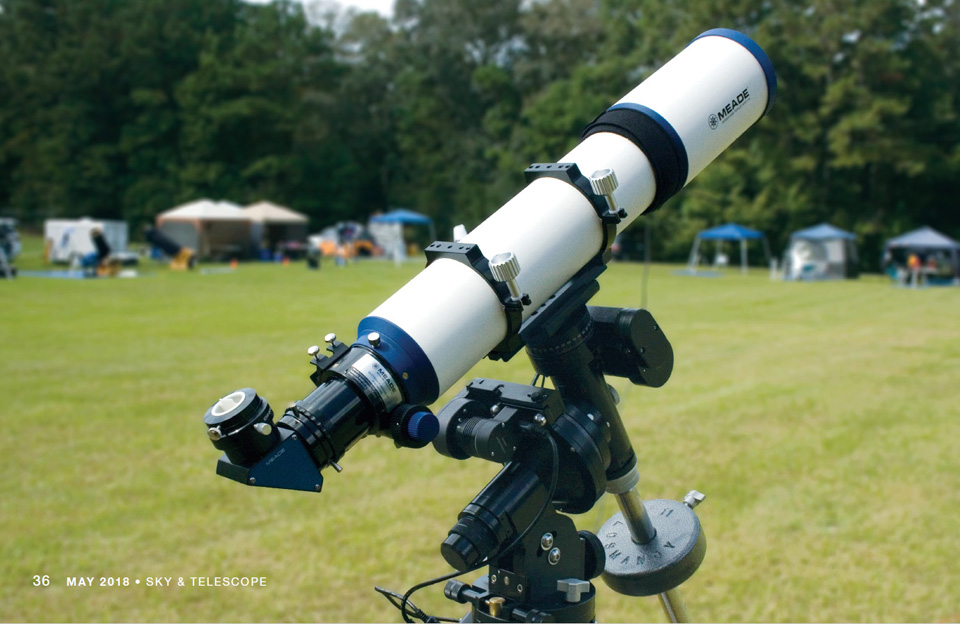 The scope includes a 3-inch Crayford-style focuser with a 10-to-1 fine-focus knob that incorporates a non-marring compression-style system to secure your star-diagonal, camera, or eyepiece. The focuser itself can be rotated independently of the tube, a big help for astrophotographers when composing shots. Up front is a sliding dew shield that can be retracted when installing solar filters, or to save space when storing or transporting the scope.

Accessories included with the 115 ED are few. A nice set of tube rings are bolted to a robust Vixen-style dovetail bracket. The rings are drilled on top to accommodate an optional bracket for a guide telescope or other accessories. Finally, there’s an attractive lightweight carrying case for the telescope. While this aluminium-framed plastic case holds the scope snugly in place with die-cut foam and is sufficient for storing and transporting the scope, it’s not meant to take much abuse. 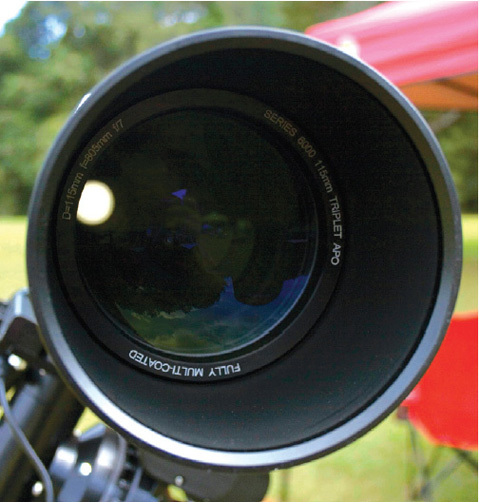 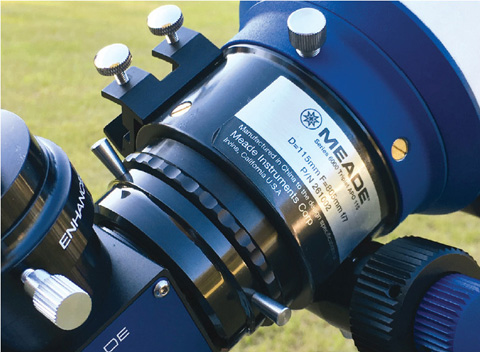 The beefy 3-inch focuser included with the 115 ED includes a blue anodized 10-to-1 fine-focus knob. Right: The unit’s drawtube is marked in centimetres to help quickly repeat focus with your favourite eyepieces and other accessories. The 2½- to 2-inch visual back can be independently rotated by holding the large knurled ring and turning the “captain’s wheel” with aluminium pegs. 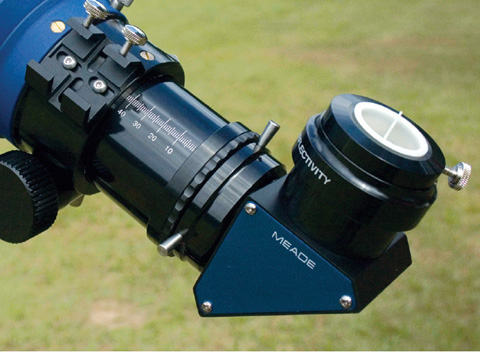 The unit’s drawtube is marked in centimetres to help quickly repeat focus with your favourite eyepieces and other accessories. The 2½- to 2-inch visual back can be independently rotated by holding the large knurled ring and turning the “captain’s wheel” with aluminium pegs.

Star tests on the 115 were as I had hoped. Diffraction ring patterns of a slightly out-of-focus star on both sides of focus looked nearly identical, a sign that its objective is well-corrected. While I observed a few deep-sky objects from my backyard, I did most of my deep space cruising on a visit to the Deep South Star Gaze in the dark piny woods of Louisiana. It was amazing what this scope could do for globular star clusters. 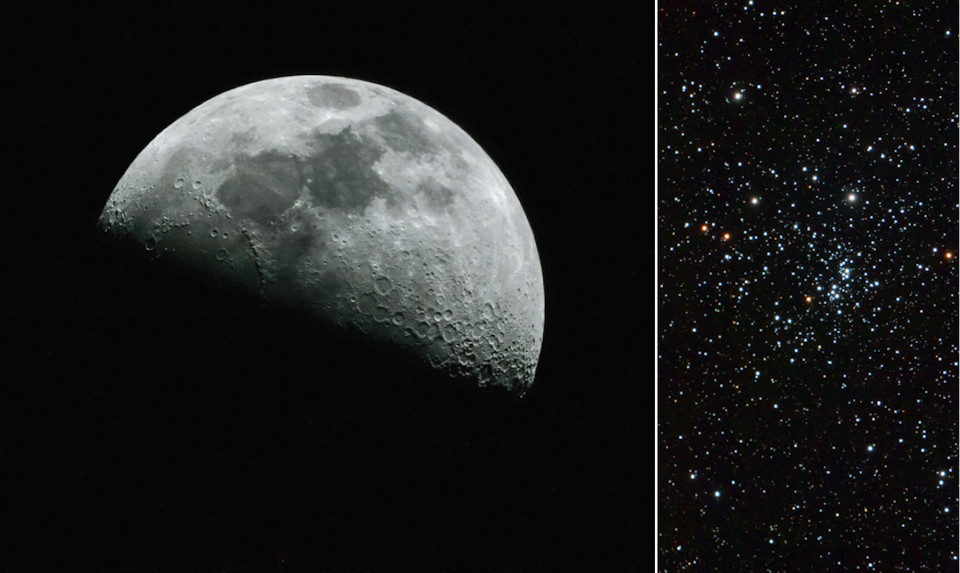 Views of the Moon were colour-free, with inky-black shadows within the craters along the limb at first quarter.

Looking at M15 in Pegasus, I had to keep telling myself this was a “small” telescope. The relatively tight globular can be a test for instruments in this aperture range, but not for the 115. I was easily able to resolve its outer halo of stars, both because they were tiny in the telescope’s sharp images and because its excellent optical quality allowed me to really push the magnification, making resolution easier. 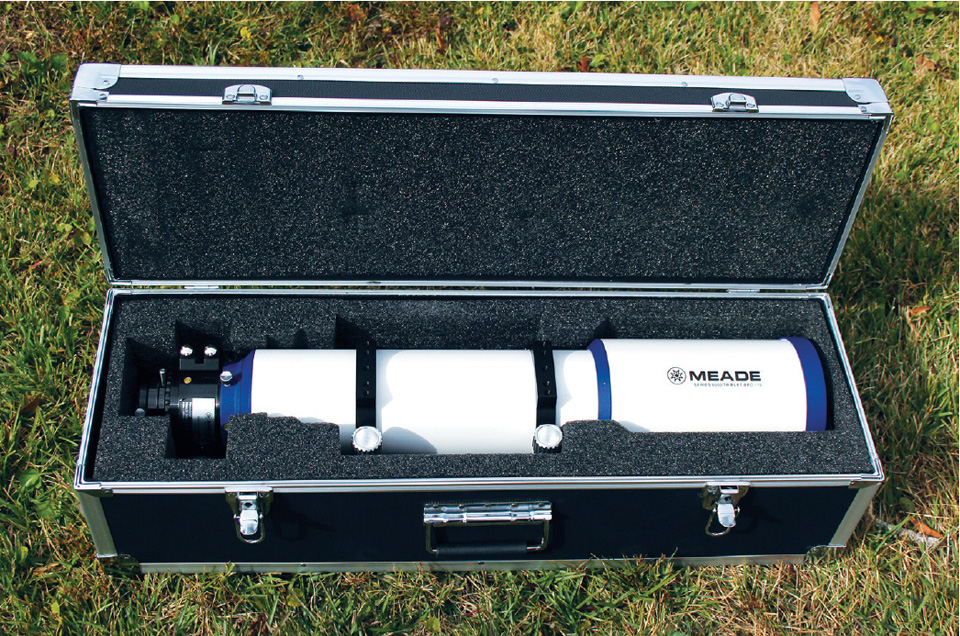 The Meade 115mm Series 6000 ED Triplet is shipped in a hard-sided plastic case with metal trim and form-fitting foam.

Although the 115 did a nice job on medium-sized deep-sky targets, it was with the big objects that it really shone. With a 35-mm wide-field eyepiece in the focuser, I had stunning views of the huge North America Nebula (NGC 7000) and both bright sections of the Veil Nebula. While the scope doesn’t provide a lot of aperture horsepower, I was still amazed at what this modest refractor could reveal. Not only were the east and west loops of the Veil visible, but with the aid of a light-pollution reduction filter I was also able to detect Pickering’s Triangle, the dim patch of nebulosity lying between the two halves of the Veil. Of the big galaxies, M31 was particularly marvellous, easily showing off one dust lane. Andromeda’s normally subdued satellite galaxy, M110, was bright and obvious.

The Meade 115 ED functioned well visually, but that’s only part of the power of these instruments. The critical question was whether this reasonably priced telescope would be up to the rigors of deep-sky astrophotography. In imaging, mechanical soundness is at least as important as optical quality. I’d been impressed with the focuser and other mechanical qualities of the 115mm during my visual run, but astrophotography will stress any telescope. 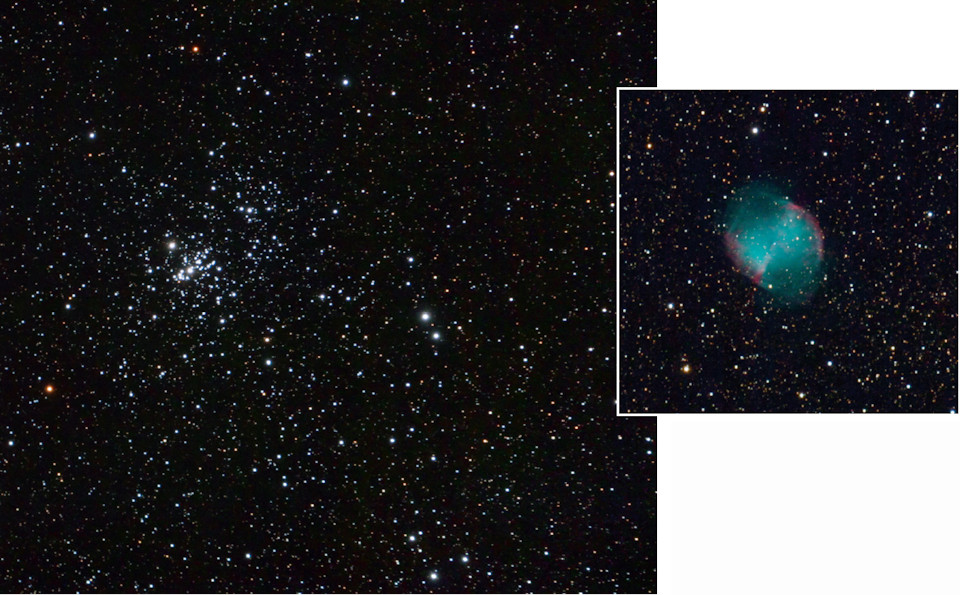 The star field around NGC 869 and NGC 884, the Double Cluster, was tack-sharp when using field-flatteners. The author used an off-brand flattener for this photo that doesn’t reduce the telescope’s focal length, to take full advantage of the scope’s resolving power. Although a relatively small target for a 4½-inch instrument, M27, the Dumbbell Nebula, displays a wealth of detail in this image captured with the 115 ED and a Canon 400D DSLR operating at f/7.

The typical weak link in refractors is the focuser. The Meade’s 2½-inch Crayford-style focuser acquitted itself well in the most crucial test. I inserted my heaviest DSLR camera and field flattener into the focuser and pointed the telescope near the zenith. Would it slip without the focuser being locked down? Nope. Despite its easy focusing action, it never even threatened to slip. I can forgive many focuser faux pas if this requirement is met. The unit also had plenty of range; I had no problem bringing any camera or eyepiece combination into focus, though I secured the draw tube lock knob when imaging.

There were, however, a few minor deficiencies with the scope’s focuser. While the 10-to-1 fine-focus knob is a boon for achieving sharp images, this particular telescope’s fine focus action exhibited some backlash. I’d focus inward, let go of the knob, and it would spring back slightly. Although this never prevented me from achieving proper focus, it was nevertheless something I always needed to be aware of.

The other thing I had concerns with was the focuser’s visual back. This is a ring with three “captain’s wheel”-style pegs. In typical operation, you insert a star diagonal or camera and rotate the ring clockwise using the pegs for added grip on the collar to secure the chosen accessory. While my heavy DSLR was held securely, rotating the visual back counter-clockwise to remove the diagonal or camera would sometimes loosen the whole visual back, which screws onto the scope’s focuser. Not a fatal flaw, but annoying nevertheless.

As for the telescope’s imaging performance on deep-sky objects, I gave that a high grade. Without a field flattener like Meade’s optional Series 6000 model, stars near the field edge are radially elongated, as is typically seen in an uncorrected refractor. But inserting the flattener completely removed the distortion, producing sharp, round stars right to the edge of my camera’s APS-C format detector. Stars looked remarkably clean and fringe-free across the entire field.

In my backyard, the f/7 focal ratio of the Meade proved as much of a plus for imaging as for visual observing. While it doesn’t provide quite the wide field of faster focal ratios, the 115mm f/7 still delivers plenty to work with, particularly by offering a larger image scale. The reward for shooting at f/7 was that it allowed me to expose longer in my light-polluted yard before the sky background became overwhelmingly bright.

What’s the best compliment I can give the Meade Series 6000 115mm ED Triplet APO refractor? I was sorry to see it go when the time came to return it. My biggest surprise was how much I enjoyed using this small scope visually. While there’s no such thing as an all-purpose telescope, this excellent instrument was as close to that as any telescope I’ve used in a long time.

Reviewed by Rod Mollise, Contributing Editor, Sky & Telescope magazine, May 2018. After decades of using SCTs, Rod has embraced the joys of astronomy observing through refracting telescopes.